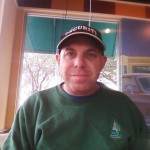 My husband, William, and I have been married for the past 16 yrs. We have 3 wonderful boys. In December of 2005, my husband had a stroke at the age of 42. Soon after, he was diagnosed with diabetes. Five yrs and one major move later, he became really ill due to uncontrolled diabetes. At least that’s what he was told. In February of 2011, William was hospitalized with kidney failure. It was then, that hospital preformed an MRI and informed us about his enlarged prostate. The first urologist said his bladder stopped functioning due to his diabetes, not because his prostate was blocking the urine flow and he was too young to worry about his prostate. Upon second opinion, and 2 tests and a biopsy later, it was confirmed he had prostate cancer. This was July 21, 2011…5 days before his 49th birthday. Thanks to Dr Andrews of the Mayo Clinic here in Phoenix, Az, my husband is 2 months post da Vinci and looks, sounds feels better, and has more energy than he has in 7 yrs. We changed our eating habits when he was diagnosed with diabetes, but now they have changed yet again and thanks to his current job, he gets plenty of exercise 5 days a week. If it hadn’t been for a second opinion, who knows if our boys would still have their dad around.