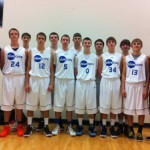 My name is Anthony Medina and I am a former basketball player and recent graduate of the University of St. Thomas in Houston, Tx. Back in February of this year Gabe Canales came to speak to the Men’s Basketball team at St. Thomas about the importance of a healthy diet and lifestyle. I had always been very careful about what went into my body, but I never realized how great habits would benefit me the rest of my life.

After Gabe spoke to us as a team I approached him about the possibilty of forming a boys high school team that would play in spring and summer tournaments. The team would be called Blue Cure and the boys would be the first to help and spread the message to the entire basketball community. In the beginning I wanted nothing more than to be a part of something bigger than myself and hope to have an impact on others lives.

Now Blue Cure Basketball has grown into a program that has five teams, each in seperate age divisions. Our 11U(and under), 13U, 14U, 15U, and 17U teams play statewide tournaments and are doing an incredible job of spreading the Blue Cure message. June and July will be busy months for all five teams since each will be playing in tournaments at least twice each month.

There are few things in the world that have no boundries, sports is one of them. All races, religions, and social classes compete in sports together. This athletic community is an incredible audience that we would love to share the Blue Cure message with. The hope is that Blue Cure Basketball will be the first step in sending that message.